↓ Skip to Main Content
Home › Events › Potlucks with a Purpose

Potlucks with a Purpose 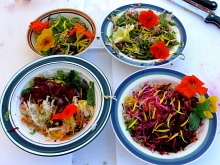 The One Island Sustainable Living Center hosts periodic free community potlucks that will feature not only tasty foods but also thought provoking films, presentations, web sites, books, culinary lessons, dance, music or art = Potlucks with a Purpose that expand your horizons. If you don’t have time to cook, bring a natural healthy dessert or a $10 donation is welcome as your contribution.

Where does Kona’s Water Come From? June 26th

Film Night – Queen of the Sun – what are the bees really telling us? May 22nd

May 10th – Film Night with Juliette of the Herbs

May 31st – Ecovillages Around the World and

July 27th Film Night – End of the Line – where have all the fish gone?

Future Potlucks with a Purpose gatherings will feature:

Come expand your horizons – and contribute a dish to a great meal!