↓ Skip to Main Content
Home › Sugars and the Glycemic Impacts

Sugars and the Glycemic Impacts 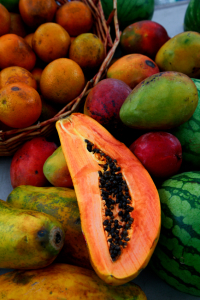 Glycemic index (GI) is a measure of the effect of 50 grams of carbohydrates from a specific food on blood sugar levels. Carbohydrates that are quickly digested release their sugars into the bloodstream rapidly have a high GI.

Glycemic load (GL) is calculated by multiplying the GI by the grams of carbohydrate in a serving of the food and dividing the total by 100. A low GL is between 0 and 10, a moderate GL is between 11 and 19, and a high GL is above 19.

Although watermelon has a GI of 72, a “serving” of watermelon (meaning a half cup of the red section that is eaten) provides only 6 grams of carbohydrate and therefore has a GL of 4, which is low.

Note that this calculation is done using the weight of carbohydrates in a serving, not the weight of the serving. Of course people are quite likely to eat more than this at a time, but the GL will still be low.

The important point is that the total amount of carbohydrate in a food is just as important as its GI in determining its impact on blood sugar.
GI has sometimes been used to judge the healthfulness of foods. Unfortunately, it conveys nothing about a food’s total nutritional content, or any harmful contaminants, or products of oxidation that may be present.

Foods that contain little, if any, carbohydrate have a very low GI and a negligible Glycemic Load (GL).
For example, meat – even processed meat like Spam, or deep-fried pork – has a small impact on blood sugar (a low GI). However, it has the potential to significantly increase insulin resistance and to have adverse effects on blood glucose control over the long term.[1-2]
Unhealthy choices of carbohydrate-rich foods can result from over-reliance on their GI. The GI of potato chips is lower than that of baked potatoes because all that added fat does slows down the increase in blood sugar.

Other unhealthful snacks, such as candy bars, cupcakes, and ice cream, can also fall within the low-GI range. In contrast, plenty of nutritious, higher carbohydrate whole foods, such as some fruits, starchy vegetables (sweet potatoes), and whole grains, have a relatively high GI (like watermelon) or GL (like brown rice).

Generally foods aren’t eaten alone, but in combinations. The combination can have a profound effect on the meal’s overall glycemic impact.
For example, baked potatoes have a high GI and GL. However, when eaten with the skin and accompanied by legumes or vegetables – such as vegetarian chili, lentil loaf, or kale salad – a potato’s sugars are absorbed more gradually and the potato’s GI is blunted.

In addition, the body benefits from the many other nutrients, including vitamin C, that baked potatoes contain.
Although relying on a food’s GI and GL to make food choices has limitations, these indicators are helpful when appropriately used. For instance, compare the GI and GL of similar foods or foods of the same category:
Food Glycemic Index /Glycemic Load
Rolled Oats 55 13
Instant Oatmeal 79 21
Cornflakes 81 20
Barley, cooked 28 12
Millet, cooked 71 26
“Original” Rice Milk 86 23
“Original” Soy Milk 34 5

Relative to the diets of nonvegetarians, vegetarian and vegan diets typically have a low GI and a low to moderate GL. This factor may contribute to the reduced risk of heart disease and type 2 diabetes in vegetarians, compared with non-vegetarians.

Some foods are generally not included in GI lists because they lack carbohydrates (e.g. meat, poultry, and fish) or they don’t contain enough carbohydrates to make the GI test practical.

Non-starchy vegetables, such as leafy greens, broccoli, cauliflower, celery, peppers, and cucumbers, are good examples of the latter. To get 50 grams of carbohydrates from chopped broccoli, the test would require eating almost nine cups.

1. Type of monosaccharide present. Glucose has a much greater impact on blood glucose than does fructose. Agave (GI 13; GL 1) contains mainly fructose, but this doesn’t make it a more healthful choice.

2. Type of starch present. The two principal and common starches in foods – amylose and amylopectin – are digested at very different rates. Amylopectin, which constitutes about 70 percent of the starch in foods, is rapidly absorbed into the bloodstream and thus has a higher GI; amylose is digested more slowly. Various strains of brown rice differ greatly in amylose and amylopectin content and thus GI can range from 50 to 87. Some varieties of brown rice (low in amylose) have higher GIs than some varieties of white rice (high in amylose).

3. Amount and type of fiber present. Fiber generally reduces the GI of a meal, however foods rich in viscous fiber (i.e., beans and barley) reduce the meal’s overall GI to a greater extent than foods rich in nonviscous fiber, such as wheat bran. In addition, the GI of high fiber foods and generally lower than their refined counterpart. Thus a whole grain is likely to have a lower GI than the same grain, refined.

4. Physical barrier. Beans and whole grains are surrounded by a coating of fiber that serves as a physical barrier to protect the seed. Because this barrier makes it more difficult for enzymes to digest the grain, these foods have a lower GI.

5. Ripeness. As foods ripen, their starches turn into sugars, increasing their GI.

6. Exposure to heat. Raw foods have a lower GI than the corresponding cooked foods. Cooking breaks down plant cell walls, increasing the rate at which its starches and sugars are absorbed by the body.

7. Particle size. Small food particles have more surface area than the same amount of food in big pieces; this allows more rapid digestion and absorption. Thus intact whole grains have a much lower GI than ground grains, whole fruits have a lower GI than fruit sauces or juices, and mashed beans have a higher GI than whole beans.

9. Crystallinity. Raw starch is crystalline, with molecules that are organized in a sequence that repeats. Cooking disrupts this structure, making the starch more digestible and resulting in a higher GI. However, as the cooked starchy food cools, the starch recrystallizes to some extent, resulting in a lower GI. Thus red potatoes, cubed and boiled in their skin, have a GI of 89. Refrigerated overnight and eaten cold the next day, the same potatoes have a GI of 56.

10. Acidity. Adding an acid, such as lemon juice or vinegar, to food reduces its GI. Even small amounts of vinegar (less than an ounce) have been shown to reduce GI by about 30 percent. Fermentation produces acid, yielding foods with a lower GI. Yogurt has a lower GI than milk, and sourdough bread has a lower GI than regular bread.